Greece to Pay 89,4 MEUR to the EU Budget Because Of Growth!

Imagine that you are a Head of State attending a plush dinner party with your colleagues from other EU member states after a hard day's worth of haggling and somewhere between the main course and desert, an assistent comes up to you and tells you that the party will cost you roughly 2,1 BEUR. That is how the British Prime Minister must have felt the other day. And the Greek Prime Minister wouldn't have enjoyed his desert either because his bill came to 89,4 MEUR. A much smaller amount but nevertheless.

One never ceases to learn more about the mysteries of how the finances of the EU work. The general picture is easy enough to understand: member states make contributions to the EU and they receive funds back from the EU. Depending on the balance, that makes them a 'net contributor' or a 'net recipient'. The idea is that the stronger countries are net contributors and the weaker countries net recipients. So far, so good.

And here comes the Catch 22: earlier this year, the EU started to calculate how much of the hidden economies should be brought on the official books of each country. UK officials calculated that sex work generated 5,3 billion pounds and another 4,4 billion pounds coming from the sale of drugs (cannabis, cocaine, etc.). A boost of 10 billion pounds to GDP which also boosted the calculated EU contribution. A lot of buck for the bang, as American slang would describe that...

The most extreme example of EU calculations is that Greece now has to pay up growth-related EU contributions of 89,4 MEUR even though the country has had a 25% GDP decline in the last 5 years. That will make the Greek government think twice before it brings too much of its hidden economy on its official books.

Much to my surprise, France and Germany are the largest beneficiaries of this exercise, receiving rebates of 1.016 BEUR and 779 BEUR, respectively. Particularly the German rebate is a surprise because Germany, despite low growth on its own, has grown faster than most of the other member states. Perhaps the Germans pay fewer visits to brothels and sniff less cocaine than the investment bankers in the City of London.

True Europeans might have expected the British Prime Minister to respond as follows to the 2,1 BEUR bill: "Great Britain and all the other member states have signed treaties which govern the contributions to and receipts from the EU. Great Britain will certainly not only claim its receipts forcefully but will also pay its contributions without delay". Instead, David Cameron was quoted as saying: "I will not pay!"

Below are two articles from The Guardian and a chart which provide detailed information about the above. 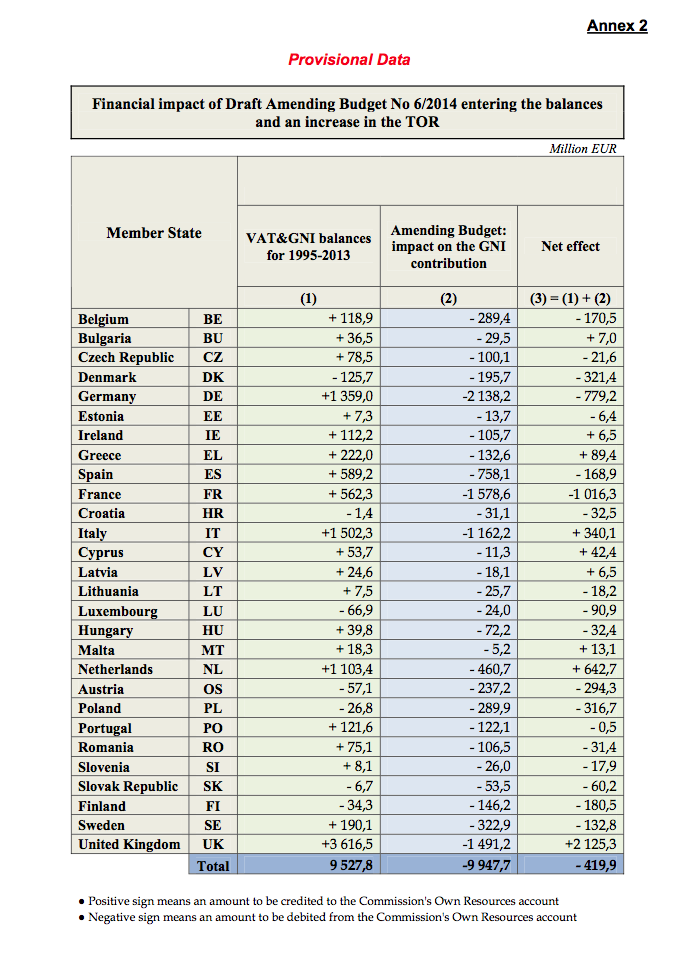