"The Greeks Can Now Smile!" - After Having Benefited From The "Biggest Solidarity The World Has Ever Seen.”

Government spokesman Dimitris Tzanakopoulos is credited with the promise that the Greeks can now smile following the successful settlement of Greece's exit from the 3rd program in August and ESM chief Klaus Regling reminded Greeks that they had been the beneficiary of the world's biggest solidarity effort ever. No better way for Alexis Tsipras to celebrate all this than by putting on a red tie.

It would be unfair to spoil the party by diminishing Greece's accomplishments. Only 3 years ago, the vast majority of politicians, commentators, analysts, etc. expected chaos for Greece's future: declaration of default and perhaps even repudiation of debt; exit from the Eurozone; breakdown of domestic stability; etc. It is unquestionably to the credit of Alexis Tsipras that all of this could be avoided and that now, 3 years later, the political establishment is celebrating Greece as a great success story. The fact that Tsipras accomplished this by essentially accepting just about everything, without resistance, that was put before him is a moot point. The end justified the means. I would further venture to say that no non-leftist government could have gotten away with accepting just about everything the creditors demanded.

If Tsipras celebrated with a red tie, the EU and Eurozone leaders celebrated with an effusion of self-praise. That, I think, was inappropriate, to say the least. The way the EU handled, beginning in the spring of 2010, the external payment crisis of Greece was a blunder of historical proportions and here is a compilation of articles I wrote about the subject back in 2012.

So how good is the new agreement which was reached a few days ago?

I propose that in any debt crisis, be it personal, corporate or sovereign, the borrower is faced with 2 principal issues: (a) the amount of interest he has to pay and (b) the amount of loan instalments he has to repay. The unique character of sovereign debt is that loan instalments never really get paid, i. e. nominal debt is hardly ever reduced. Instead, loan instalments are always refinanced. As a result, to offer an overindebted borrower like Greece an extension of maturities is nothing other than the recognition of reality. Those who consider this substantial debt relief should explain why they would prefer to waste time and effort every few months to renegotiate individual debt maturities.

So the crux of the matter is interest expense. Interest expense flows through the budget which means that it comes out of government revenues. Every Euro of interest payments is a Euro which is not available for other government expenditures. Pensions may have to be cut in order to pay interest. The point is: if one wants to give a sovereign borrower debt relief, one has to reduce his interest expense.

If the new agreement reduces Greece's interest expense below the 5,6 BEUR, then it is debt relief. If it doesn't, it is no relief at all.

At the same time, Greece is taking on quite a load of new debt for the primary purpose of building up a cash buffer. That cash buffer, of course, would increase interest expense.

In short, the principal benefit for Greece seems to be that its debt has now been regularized. That is in and by itself a very significant benefit because only if one's debt is regularized can one begin to commit time and resources to things other than debt negotiation. Whether or not Greece's budget will be relieved of interest expense as a result of the agreement remains to be seen.
Eingestellt von kleingut um 7:28 PM 13 comments: 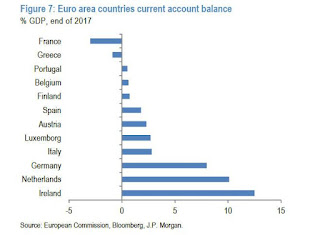 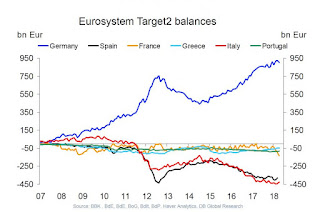 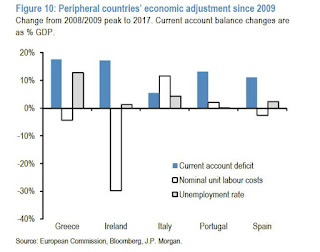 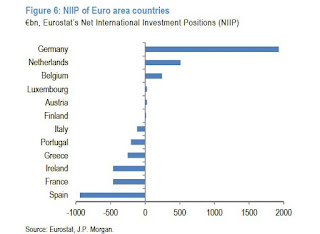 Certainly at that point, Germany will stop educating others about reforming their financial sectors and economies.
Eingestellt von kleingut um 7:34 PM 11 comments: