Before the introduction of the Euro, every country had a parallel currency. It was called 'local currency'. Business was conducted in other currencies as well and they were called 'foreign currency' (I remember when, years ago as a tourist, Greeks seemed to prefer getting paid in Deutsche Marks rather than Drachma). The difference between the two currencies is that the local currency was the only legal tender in each country and it could be printed by each country whereas the foreign currency had neither advantage.

The great advantage of a parallel currency over a Grexit would be that Greece remains a fully-fledged member of the Eurozone and those who have Euros can happily continue to do business in Euros without incurring any additional fees. The advantage for the Greek economy is that the state could provide financial breathing space by issuing the new Drachma. Greeks may discover that it is better to receive payment in a parallel currency of lesser value than no payment at all in a Euro of full value. 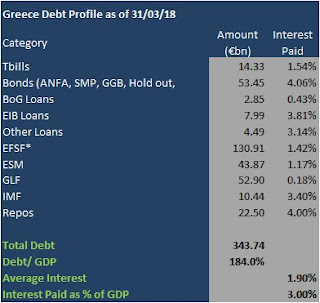 In a blogpost after Varoufakis's resignation as Finance Minister, I predicted that he would remain in the public eye for a long time to come and I put the following words into his mouth: "The only thing I have not yet decided is the timing of my future publications. I do not intend to put everything out there at once. Instead, I will time my publications in such a way that they keep the flame burning for a long time."

For almost 3 years now, I have been amazed at the media's fascination with a failed Finance Minister of a small country. Time and again, and rather often, Varoufakis was able to place thought pieces in major international publications and give interviews to prominent news media. But this was nothing compared to the last 24 hours.

In the last 24 hours, I received a total of 12 alerts to publications, interviews, podcasts, etc. authored by Varoufakis. One of the publications was a very interesting article about Italy in The Guardian which was appropriately titled: "With his choice of prime minister, Italy’s president has gifted the far right!"

I am now pondering an article with the title: "With its enormous political turmoils, Italy has gifted Yanis Varoufakis!" My prediction is that Greece will turn out to have been only a warm-up for Varoufakis. Italy will give him a much broader audience and my guess is that he will play that audience better than most other commentators.
Eingestellt von kleingut um 8:53 PM 7 comments:

The Piraeus Port Authority S.A. (PPA) is a publicly traded stock corporation which operates everything that takes place in the Piraeus harbor (the land is leased from the state; not owned by PPA). The largest shareholder is Cosco Shipping of China with 51% outright. Another 16% are held in escrow in favor of Cosco until 2021 by which time they will also pass into outright Cosco ownership provided that Cosco completes the mandatory investments. The Hellenic Fund and Asset Management Association (HRADF), i. e. the Greek state, still owns 7,14% after having sold the above 67% to Cosco in 2016. Domestic and foreign institutional investors own roughly 8-10% each and the rest of the stock is widely distributed.

PPA has made a comprehensive Presentation of Financial Results 2017 to the HRADF. Here are some highlights:

The non-financial part of the presentation includes the following highlights:

Conclusion
It is hard to think of a better foreign investment for Greece. A 'good' foreign investment is an investment which leads to something positive which would not have happened without that foreign investment. It is obviously impossible to say how PPA would have developed if Cosco had not become involved in 2008 but one point of reference is that the pier which had been operated by Greek management until 2016 had essentially been a money-squandering machine until that time (almost 100 MEUR pre-tax losses in 5 years!).
Eingestellt von kleingut um 8:00 AM 12 comments:

Klaus Regling, head of the European Stability Mechanism (ESM), this week drew a parallel between Greece today and postwar Germany in a speech in Aachen, Germany. Germany, he reminded the audience, had repaid the last instalment of the 1953 debt restructuring only in 2010. Successful debt restructuring was all a matter of long tenors, according to Regling.

Regling casually overlooked a few details in his speech. One, a very major debt forgiveness had been part of the 1953 debt restructuring (50% of all debt). And, two, there was the Marshall Plan which provided a key stimulus for the unfolding Wirtschaftswunder in Germany.

But still, the valid question is: Would the Greek economy experience its own Wirtschaftswunder if only a sufficient external stimulus and adequate debt relief were given? That is really the key question haunting Greece observers since 2010. Yanis Varoufakis, for one, had argued tirelessly in his blog, long before he became Finance Minister, that only a major public stimulus could get Greece out of its depression because, he said, when the situation is as depressed as it was/is in Greece, no private initiative could accomplish this goal.

One thing is certain: whenever there is an economic problem and one throws money at it, there will be an improvement. If Greece were given, as a present, say, 10 BEUR, the Greek state would spend most of that money domestically. The expenses of the state are incomes/revenues for privates. The privates, in turn, spend their new incomes/revenues and they become incomes/revenues of others. And so forth.

But here is the great uncertainty: Will that initial improvement trigger a lasting recovery or will it only turn out to have been a flash in the pan?

There are many economic examples for both scenarios. The postwar German campfire was very well built and the Marshall Plan, actually a relatively small stimulus, provided the darting flame which turned into a lasting fire. Forty years later, the former East Germany was not a well-built campfire. The West did not throw a cup of gasoline on that campfire. Instead, the West threw (and still throws) truckloads of gasoline on that campfire (roughly 100 BEUR annually) and it still hasn't really developed its own strength.

How can one explain the difference between postwar Germany and the East Germany of the 1990s? Well, it certainly can't have been racial and/or cultural reasons: the East and the West were ethnically the same Germans. The answer must be found elsewhere.

Is the Greek economy today more akin to the postwar Germany of the 1950s or East Germany of the 1990's? One thing is certain: post-1953 Germany was a tremendous economy to invest in, both for Germans as well as foreigners (particularly Americans made huge investments in Germany). Greece, in contrast, ranks as one of the least attractive countries of the Eurozone, of the EU and of Europe in total to invest in (Doing Business Report 2018).

Cosco had encountered a lot of criticism/objection in its early years. Reactions to my positive articles about Cosco pointed out inhumane working conditions in Chinese sweat shops. The announcement around 2013/14 that Cosco was projected to add about 1-1/2 - 2% to Greece's GDP by 2018 did not catch much attention. Today, it seems that actual results have persuaded the critics.

So is the Greek economy now akin to a well-built campfire waiting for the initial darting flame or not?

My gut feeling is that there is no major change/improvement in Greece's overall attractiveness as an economy to invest in. The truly important changes/improvement in the structure of the Greek economy have not taken place. At the same time, I believe that there could be new 'Cosco's' and the Greek government should make every effort to look for them and find them. If only there were a dozen 'Cosco's' in the Greek economy, their presence would probably do more to change/improve the structure of the Greek economy than all the Troika's, Task Forces, etc. put together.
Eingestellt von kleingut um 10:05 AM 12 comments:

The English edition of the German Handelsblatt published an article showing that Germany was, by the end of 2016, the leading breaker of EU rules: 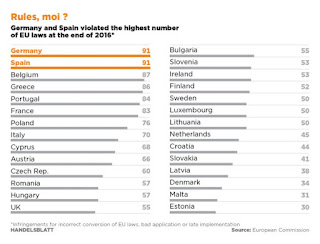 The German author of the article concludes: "The country, which has lectured debt sinners like Greece, performs worst in complying with European Union legislation. Physician, heal thyself!"
Eingestellt von kleingut um 8:15 AM 4 comments: