Macron's Agenda For Visit To Greece

French President Emmanuel Macron will travel to Athens next month to send a message to fellow euro zone leaders about the need to strengthen the currency union, at a time when Greece is emerging from years of economic crisis, French officials said. “The idea is for France to be on Greece’s side to help this recovery,” an adviser to Macron said.

France has been on Greece's side for quite some time now. To be exact: since October 23, 2015, when the French Finance Minister Michel Sapin and his Greek counterpart Euclid Tsakalotos, in the presence of French President Francois Hollande and Greek Prime Minister Alexis Tsipras, signed a "Protocol between the Hellenic Republic and the French Republic For a Partnership for reforms in the Hellenic Republic." My reaction to this protocol at the time was that "France will modernize Greece."

Athens will certainly be a fitting place to announce the need for reforms of the Eurozone and of the EU altogether. Athens is an even more fitting place to make an interim check of all the reforms which Greece agreed with France to make only two years ago. The focus of the protocol was on the following areas:

The protocol promised that "actions and relevant support, as well as clear a timetable of initiatives, will be defined and agreed between the Greek Authorities and the Reform Partner." The first step would be to check whether this was done. The second step would be to check compliance with the timetable of initiatives. Actually, the protocol promised that "the achievements of this Protocol will be reported twice a year to the two governments, by two senior civil servants, designated respectively by Greece and France."

If the above promises were kept in the last two years, they certainly received little or no attention in the media. Macron would provide an excellent public service if he brought the public up to date.
Eingestellt von kleingut um 12:07 PM 11 comments:

Thanks to an article in KeepTalkingGreece, I now have an entirely new definition of what Communism was: 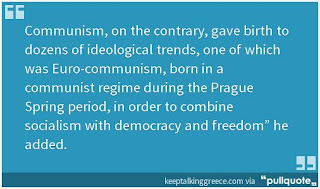 It seems to me that the Greek Justice Minister Stavros Kontonis, when making the above remark, overlooked the fact that it was Communism which destroyed the ideological trend coming out of Prague.
Eingestellt von kleingut um 11:58 AM 6 comments:

The Ministry of Finance reported that for the period January-July 2017, the State's primary surplus (not to be confused with the General Government's primary surplus which includes the social security and local administrations and which is the basis for memoranda compliance) amounted to 3.053 MEUR. That was 12% higher than in the same period of 2016 AND 46% higher (!!!) than the 2.098 MEUR which had been the target. Hurrah?

Not really. State revenues were 2% below 2016 so that one would generally have expected a lower primary surplus. The opposite being the case, the answer is obvious: a significant limitation in expenses, i. e. austerity.

By all considerations, the Greek State must be flush with cash: the year 2016 had closed with a budget surplus of 1,3 BEUR; there have been disbursements under the program; fresh funds were raised from markets; the State is not reducing arrears; etc.

In view of the above, it is difficult to understand why the State would voluntarily limit expenditures in such critical areas as hospitals, social solidarity and public investments below the levels provided for in the agreements with creditors. Voluntary austerity at times when creditors are being accused of imposing austerity?

Here are the figures published by the Ministry of Finance and here is the Ministry's commentary.
Eingestellt von kleingut um 8:26 AM 7 comments:

It looks like the case of Andreas Georgiou has a fair chance of becoming one of those situations where a final verdict will never be accepted, regardless how often a verdict is rendered. I am personally contributing to this phenomenon by writing another article about the case when in actual fact I thought that my previous, very recent, article had closed the case from my point of view.

I re-open the case because I have just read two very interesting articles on the Georgiou case. In "The case of Georgiou: When the Greek justice system is cast aside", the author, Minas Konstantinou, reaches the following conclusion:

"Whatever the outcome, the case of the former ELSTAT chief has already irrevocably exposed all parties, both inside and outside of Greece: the current SYRIZA -ANEL government and the preceding ones who for years accepted the ultimate humiliation of public demands; the Justice Department that permits such flagrant intervention into the country’s internal affairs as a prerequisite for receiving payments towards loan financing, the European and American partners, who can no longer conceal the terms on which their game is being played internationally, on the backs of democracy and justice. And of course, there are the major Greek and foreign media, who are yet again proving blind to the bigger, anti-democratic picture." (n. b.: the emphasis is mine)

In "The whole truth and nothing but the truth", Nick Malkoutzis reaches a far shorter conclusion:

"Anyone who believes that it is imperative for a country’s economic data to be grounded in reality rather than fantasy has understood that the case against the former head of the Hellenic Statistical Authority (ELSTAT), Andreas Georgiou, is a farce."

I think these two articles serve as evidence that the debate about Georgiou is likely to go on for a very, very long time. However, I wish to add a somewhat different perspective on the case.

According to Wikipedia, Andreas Georgiou was born and raised in Greece and completed his secondary education there. Thereafter, he went abroad, first to study and then to work. From 1989 - 2010, he worked for the IMF in Washington. In 2010, he returned to Athens to take up the job as Head of ELSTAT. At that point, Georgiou had spent about 30 of his then 50 years outside of Greece, his entire adulthood.

I myself had left my home country Austria at age 18, after completing secondary education. I went abroad first to study and then to work. When I returned to Austria, I had spent 23 of my 41 years outside my country of origin. My passport still showed Austria as my nationality but initially I thought I had landed on a different planet. Books have been written about the experiences of 'internationalists' returning to their country of origin. Andreas Georgiou clearly was an internationalist who had returned to his country of origin in 2010.

The 'returner' runs into suspicion from all sides, disguised as alleged curiosity. Whatever the new professional environment, the returner's qualifications are scrutinized by his superiors, peers and subordinates. Was he really successful abroad? Is he really competent? What does he know about the local business environment? Etc., etc. Certainly at the peer level, there tends to be very high suspicion coupled with behind-the-back maneuvers.

Georgiou's case was slightly different from mine. He did not return to Greece to start a new life there. Instead, he was 'brought in' by other outsiders to run a domestic agency and bring it up to speed, which agency before had been accused of incompetent, if not criminal conduct. It is clear that in a situation like that, the newcomer will not be given a chance, not to mention a fair chance, by the existing management. On the contrary, the existing management - now publicly degraded for incompetence and, possibly, criminal conduct - will now watch every step of the newcomer to see if and when they can entrap him.

Georgiou had another thing working against him: he was/is not a statistician by training and profession. Yes, he had been deputy division chief in the IMF Statistics Department but that is no match for professional statisticians who have been in that business all their lives, like apparently members of Georgiou's management team were.

For one person to come in and turn a situation around by himself is a mission impossible. One needs to have a support structure. Apparently, the only support structure which Georgiou had was Eurostat, his functional superiors. He seems to have gotten strong support from Eurostat in his work, which is only one more reason for his domestic resisters to watch even more closely every step he takes.

It is impossible for a manager in Georgiou's position/situation to always be 100% perfect. There will be comments which, in retrospect, should not have been made; there will be emails which, in retrospect, should not have been written; there will be other things which can always be misinterpreted by people of ill intent. And, clearly, Georgiou's professional loyalty undoubtedly went to Eurostat and not to his board of directors. In such circumstances, anyone who wants to build a case against Georgiou will find something which appears to justify such a case.

Georgiou has now been sentenced to two years in prison with three years of parole for breach of duty, on the charge that he had failed properly to inform the administrative committee of ELSTAT about the transmission of data regarding the 2009 deficit. That was the maximum penalty. No mitigating circumstances were considered. His lawyer considers the verdict a 'victory' because it concerns only a small misdemeanor. Georgiou's lawyer is wrong. A small misdemeanor or not, being convicted is being convicted. From there it is only a short step for others to later claim "would you believe a convicted person?"

Minas Konstantinou focuses on all the alleged scandals which came to light following Georgiou's first indictment back in 2013. He puts particular blame on Greece's European and American partners.

Nick Malkoutzis focuses on all the scandals which made the above alleged scandals possible in the first place. Malkoutzis rightfully points to the previous ND and PASOK governments for having led Greece into the calamity which exploded in 2010. And he also points to EU authorities who cannot have been so naive as to think that the statistics submitted by Greece were correct.

Only these 3 institutions can put the Georgiou matter to rest by coming out and stating their responsibilities.
Eingestellt von kleingut um 7:20 PM 26 comments:

Of Course It Was Georgiu's Fault!

"The reason I find the ELSTAT case so interesting and important is that in my view it’s a test case for the willingness of the Greek political class to face the misdeeds of the past, the corruption and all the things that hinder prosperity in Greece. In addition, a country without reliable statistics can’t really claim to be a modern and accountable country.

As it is now, Greece is heading towards a political trial where those who fixed the fraud are being hounded and punished, not the perpetrators. As long as the charges against Georgiou and his colleagues are upheld it is clear that the forces who want to keep Greece as it was – weakened by corruption and unhealthy politics – are still ruling. That isn’t only worrying for Greece but for Europe as a whole."

This comes from my article "The ELSTAT Case And A Messenger By Name Of Andreas Georgiu". Nothing more needs to be said.
Eingestellt von kleingut um 8:40 PM 37 comments: