Greece Is Flush With Cash!

The Ministry of Finance's Annual Report about Borrowing and Debt for the year 2018 provides very interesting information about the solidity of Greece's public financing.

The bad news is that Greece's public debt now (at December 31, 2018) stands at 359 BEUR or 181% of GDP. Those are numbers which would, under normal conditions, signal a near-term catastrophy.

The good news is that those numbers currently present no problem at all. Very little of that debt will mature in the next few years and 83% of it is owed to the official sectors of other countries. One cannot think of a more stable financier than such official sectors. Last but not least, since the debt owed to the official sectors of other countries comes at extremely low interest rates, total interest payments in 2018 amounted to "only" 6,2 BEUR, which is less than 3,5% of GDP. Such a low ratio of debt service costs would normally represent a solidly financed public debtor.

And as a footnote: the 3,5% of GDP of interest expense just happens to be the same as the 3,5% primary surplus requirement which Greece's creditors have required. Put differently, Greece has an overall balanced budget (if not even a slight budget surplus). 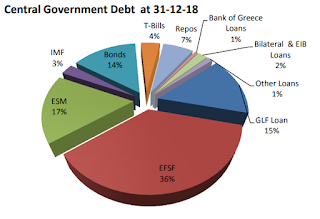 To top off the good news: the Greek public sector is literally flush with cash: the Central Government has 27 BEUR in cash reserves and state entities have another 24 BEUR, bringing the total to 51 BEUR. Those reserves would cover interest payments and debt maturities for many years to come.
Eingestellt von kleingut um 8:31 PM 1 comment: