A short article in the Ekathimerini referred to an interview which EU Commissioner Pierre Moscovici had given to the Austrian magazine Profil. Here is the original interview.

Right in his first response, Moscovici made the bold prophecy that "the Greeks will now see that their sacrifices mattered." His argument seemed to be that Greece now has more flexibility to provide for more social justice but he gave no specifics. In that same response, Moscovici described pre-crisis Greece as follows: the country's economy had been very weak, taxes were not paid, public administration was inefficient as evidenced by the fact that there was not even a nationwide real estate cadastre. A superficial reader could interpret this to mean that now, after 8 years of reforms, the economy is strong, taxes are being paid, public administration is efficient as evidenced by a nationwide real estate cadastre. Well, Moscovici didn't say that, of course. Instead, he reverted to the common phrase that "much progress has been made but there are still steps to be taken."

"The market now have confidence in Greece again. Greece has recovered the freedom to pursue its own policies. We have stopped the growth of debt" - bold statements by Moscovici.

"Varoufakis is a brilliant and eloquent person, but he is a fake. He was the wrong person at the wrong time in the wrong place. I have had many meetings with him. At least in the beginning we had a good relationship. But he was never interested in a true compromise. He always lectured all the others. His methods were not those of a statesman but, instead, of a spy. He secretly recorded conversations and negotiations. That may perhaps help the sale of his books but one doesn't generate trust that way. Furthermore, all his talk about Plan B increased the danger of a Grexit. It's alright if you have disagreements with some of your friends but if one disagrees with everyone, then one is a lone wolf."

Moscovici praised the recent debt relief agreement, emphasizing that Greece will not have to pay any interest until 2032. Presumably, he only referred to the ESM debt here. Moscovici also mentioned that the subject of debt relief might be revisited in 2032.

Moscovici was quizzed about the figure of 50 BEUR which, at one time, was used as the target for privatizations and which now is obviously unrealistic. Moscovici sidestepped this question by saying that the EU Commission had never mentioned this figure.

Bottom line: an uninformed reader could well come to the conclusion that Greece had been in deep trouble 8 years ago, that 8 years of EU-guided reforms had delivered positive results and that a bright future was ahead for Greece.
Eingestellt von kleingut um 10:01 AM 1 comment:

No Longer A Task Force To Turn To!

One expression keeps recurring whenever some form of disaster strikes Greece (be that the refugee crisis, forest fires, etc.), namely that "the Greek state is dysfunctional."

One conveniently tends to forget that there once was an EU Task Force for Greece whose mandate it was, among other things, to help the Greek state to become more functional. Its mission statement proposed that "the Task Force is a resource at the disposal of the Greek authorities as they seek to build a modern and prosperous Greece: a Greece characterized by economic opportunity and social equity, and served by an efficient administration with a strong public service ethos."

Whether it is a nation-wide real estate cadastre with zoning maps, emergency plans for natural disasters, waste management, etc. etc. - all that and many, many more things fall into the category of an 'efficient public administration'.

The trouble with the TFGR was that it was "at the disposal of Greek authorities" to be used by the Greek authorities "as they seek to build a modern and prosperous Greece." It couldn't have any authority on its own because that would have been considered an interference with Greek sovereignty.

There no longer is a TFGR which the Greek state could turn to for assistance but it is highly doubtful, in my opinion, that the Greek state, on its own, can accomplish something within a short time frame for which other countries have required decades and centuries of experience and culture to develop - a well-functioning state and public administration. The TFGR falls into the category of missed opportunities.
Eingestellt von kleingut um 11:34 AM 5 comments:

A Lesson From Fraport's Success

Fraport Greece, the 14 regional Greek airports which were acquired in 2017, reports records in revenues and earnings. Pre-tax earnings were 20,4 MEUR. Since after-tax earnings were 14,4 MEUR, mathematics would indicate that the Greek state shared in Fraport's success to the tune of 6 MEUR. Total revenues were 233 MEUR and the target for 2018 is 300 MEUR. One doesn't need a calculator to figure out that this is VERY substantial growth!

From the distance, I can visualize my Greek friends, with whom I discussed Fraport on many occasions, blaming the government for having given away such a profitable company on the cheap. I cannot judge this because I don't know the details of the transaction but I would guess that as long as the Greek state shares 30% of Fraport's earnings, it sounds like a reasonable deal.

What is Fraport doing differently than before? Is it really only the access to capital? Very unlikely. Access to capital can be destructive when that capital is invested and managed poorly. One of the great secrets of China is that they acquire (and often steal) foreign know-how. When investments are managed well and profitably, capital will come on its own.
Eingestellt von kleingut um 9:06 AM 5 comments: 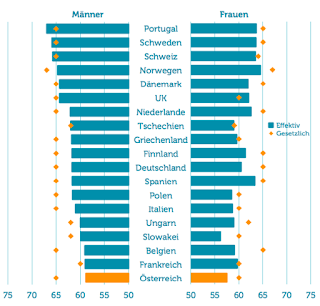 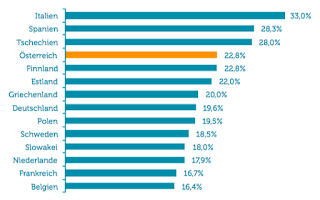 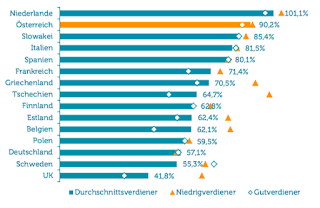 The source of the below graph is Bloomberg, as presented in this article. The graph shows annual debt payments broken down into bond maturities, loan maturities and interest on both. What stands out is the interest payments shown in this graph. It's a bit hard to tell from the width of the bars how much the underlying interest is in Euros but a full column represents 5 BEUR. And there is at best one column (2019) where the interest bar spreads over half a column, i. e. interest in the area of 2,5-3 BEUR.

In recent years, Greece has spent on average about 5,5 BEUR on annual interest. The Bloomberg graph would suggest a dramatic decline in interest, much more so than I read in the recent debt relief agreement. So either Bloomberg's numbers are wrong and/or they know something which the world hasn't been told yet. If someone from Bloomberg reads this, a clarification would be welcome.

The Farce Of EU Elites' Jubilation About Greece

Tansparency International has published a report on the "Evaluation of the Level of Corruption in Greece and the Impact on Quality of Government and Public Debt." Here are the highlights (very interesting reading!) and here is the full report.

The highlights list 10 "other key facts" (other than corruption) which underline my previous argument that the recent jubilation by EU elites about Greece having turned the corner were rather a farce.
Eingestellt von kleingut um 9:37 PM 4 comments: