Emmanuel Macron, the EU and --- Greece

French President Emmanuel Macron is the political star of the day. Many of those who, not long ago, predicted that the EU would eventually share the experience of the former USSR are now elated that there will soon be a strong EU on par as a power with the USA. Macron's wish list is remarkable: 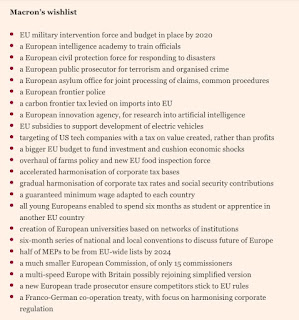 I can see how countries like Greece will become enthusiastic when they read goals like "a bigger EU budget to fund investment and cushion economic shocks", "a guaranteed minimum wage adopted to each country", etc. My recommendation to Greece is: Beware of French bearing gifts!

In 2013, the provocative German author Henryk M. Border published a book titled "Die letzten Tage Europas: Wie wir eine gute Idee vernichten" ("The last days of the EU: How we are destroying a good idea"). Most of the causes behind anti-EU populism of today are explained in detail in this book, such as: a central bureaucratic authority, mostly self-appointed and with questionable democratic legitimacy; a central arrogance over concerns of nation states; a super-efficient central authority when it comes to minor issues and incompetent with larger issues; etc.

Anti-EU populists will not be carried away by new visions if these are not based on an honest and fair assessment of where the EU has been and where it is now; what has gone wrong along the way; which major mistakes need to be corrected and why. Anti-EU populists would remind Macron that it was a French president, the legendary Charles de Gaulle who had materially shaped European integration in his time, who was completely opposed to any European federalism and who created, in 1961, the vision of a "Europe of Nations". A vision of cooperation between governments with absolutely no loss of sovereignty and no supranational institutions. The standard answer that "today's challenges are too big for any one nation to solve on its own", however correct, will not be satisfactory to anti-EU populists. Anti-EU populists will question Macron what happened to one of the EU's major principles, the "subsidiarity principle".

Macron is the prototype product of French elitism, a truly outstanding product, for that matter. Ever since de Gaulle, French elitism has put French interests before any kind of European idealism. De Gaulle's conception of Europe was as a tool to improve France, i. e. an integrated Europe must be beneficial to France. Macron has yet to make the case that even though he is a product of French elitism, he has discarded the major elements which have shaped that elitism over decades. At this point, one cannot but share the suspicion that Macron is the most capable French elitist the country has ever produced and that he beautifully disguises French national interests behind a passionate pro-EU facade.

Macron's first major industrial policy decision was to nationalize France's biggest shipyard at St.-Nazaire rather than allow it to pass into Italian ownership. This was a classic de Gaulle move and not the move of a European visionary who wants to take the first opportunity to prove that he is willing to walk his talk. All the justifications about this only being a temporary move to allow time for a better deal and agreement to emerge notwithstanding.

Macron seems to have realized that de Gaulle's vision of France's being the supreme power in any European integration is no longer workable. He seems willing and intent to share that role with Germany. But what about the other 25 post-Brexit EU countries? Will those countries be happy to see a French-German cooperation treaty or will they feel threatened by it?

First calculations have suggested that the full implementation of Macron's wish list will require additional funding by member states in the order of 3-4% of national GDPs. Those are simply guestimates and should not be taken seriously, but still: 3-4% of GDP would translate into 5-6 BEUR for Greece at present, roughly the same amount which Greece currently receives from the EU as subsidies. Will Greece be prepared to re-allocate its EU subsidies to finance a vision of the EU?

In 2016, the controversial EU agricultural policy (CAP) amounted to slightly over 50 BEUR or 42% of the EU's budget (or more than the complete implementation of Macron's wish list according to first guestimates). The true test of an institution or policy is whether one would one would rationally decide to re-instal it if, for some reason, it disappeared overnight. Whether the CAP would pass that test is rather questionable. A true revolutionary proposal would have been for Macron to propose the elimination of CAP and to use the proceeds to finance his vision of the EU.

One of the great strengths of German federalism is that the federal state distributes its federal offices and institutions throughout its 16 states. A true revolutionary proposal would have been for Macron to propose something similar for the EU. Virtually every EU member could house an EU institution and the EU would no longer be equated with "Brussels".

The charity "My Europe 2100" presents a concise summary about Charles de Gaulle. Some excepts:

"De Gaulle played a major role in its implementation (Treaty of Rome) because he saw the European common market as a positive measure for the French economy. Similarly, he strongly defended the Common Agricultural Policy (CAP), implemented in 1962. He saw it as a very effective tool to modernize French agriculture. These subsidies to promote agriculture in member States, financed by all members of the EEC, benefited France particularly because of its enormous agricultural sector. Moreover, it was in this period that the modernization of the French agriculture began: mechanization and intensive farming were starting to materialize, but subsidies were necessary. All in all, the CAP served the interests of France, and that is why de Gaulle greatly favored it. This goes to show how he put French interests before any kind of European idealism. De Gaulle’s conception of Europe as a tool to improve France widely influenced the country’s position. For example, the massive rejection of European institutions and their decisions in France nowadays can be linked to the idea that being part of an integrated Europe must be beneficial to the country: if its benefits are not immediately apparent, then European integration must be given up or completely rethought ... De Gaulle was opposed to any kind of loss of sovereignty for France. He wanted it to be one of the great powers, and for that, independence was essential. This is why he advertised his conception of a “Europe of nations”, in which national governments would closely negotiate, but would never be forced to anything ...

Overall, Charles de Gaulle’s influence on Europe has been tremendous thanks to his popularity. His conviction that France was a great nation was, and still is, very popular in the country. As a result, his ideas about foreign policy remain highly respected and widely shared within France’s public and political elite."

A first step would be to revoke the nationalization of the shipyard at St.-Naziere.
Eingestellt von kleingut um 1:16 PM 16 comments: