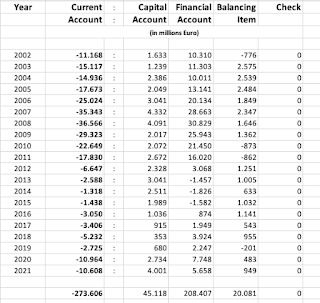 That deficit was financed through a surplus of 45 BEUR in the capital account (e. g. EU subsidies), a 208 BEUR surplus in the financial account (e. g. debt) and another 20 BEUR which the Bank of Greece calls "balancing items", i. e. items which cannot be categorized.

Why is all of that important? It is important because it helps to explain the living standards in the national economy and what they depend on. Many of the capital and consumption goods which Greeks desire must be imported for the simple reason that they are not produced in Greece. In fact, when it comes to consumption goods, a walk through a shopping mall creates the impression that most of those goods are imported. Revenues from exports and tourism are not nearly sufficient to pay for all the goods which Greeks desire to import. Greece needs funds from other sources in order to pay for the imports which Greeks desire. Without those 'other sources', the living standards of Greeks would decline sharply.

During the last couple of years, things have improved for Greek consumers and, not surprisingly, the current account deficit returned to very high levels. Not excessively high, but very high nevertheless. That really leads to a disappointing conclusion: despite all the reforms in the decade of the financial crisis, the structure of the Greek economy hasn't really changed. It still has the characteristics of a developing economy, i. e. products which the consumers desire have to be imported and imports lead to indebtedness because there are not enough products/services which the national economy can export.

In short, the living standards of the national economy still depend on: (a) foreigners lending to or investing money in Greece and (b) various types of EU subsidies and financial support programs.

Is that a long-term perspective? Not really, at least not a very good one because it suggests that Greece will always be dependent on foreigners lending to or investing money in Greece. What if foreigners, for whatever reason, would one day stop doing that?

There is no other way! And it is an urgent matter!