Greek Bail-Out: A Good Deal For Whom?

Greece entered 2010 after having posted a primary deficit of 24 BEUR in 2009 (36 BEUR overall deficit). From 2010-12, Greece received 41 BEUR in rescue loans to finance the primary deficit (19 BEUR) and other operations (21 BEUR). Had Greece not received those rescue loans, 41 BEUR (or 18%) of total government expenditures would have had to be cut right away. Also, Greece would have defaulted on 301 BEUR of debt outstanding per Y/E 2009.

In addition to the above 41 BEUR, Greece received 44 BEUR for bank recapitalizations. Had Greece not received those 44 BEUR, certainly its 4 major banks would have had to close. 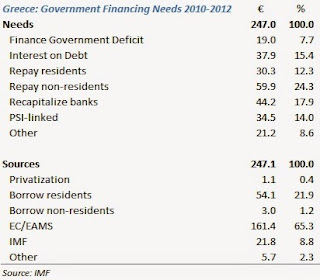 One has to come to the defense of official lenders when they are blamed for not having rescued Greece but only the big European banks. 41 BEUR for operations and 44 BEUR for bank recapitalizations is certainly not chickenfeed. Obviously, 'real help' would have had to be more: parallel to the fiscal austerity, there would have had to be growth measures for the private sector so that overall GDP would not collapse as much as it did.

As is well known, the famous 'help for and solidarity with Greece' did not only consist of the above 41 BEUR for operations. There was another 206 BEUR (including the 44 BEUR for bank recapitalizations) which ping-ponged back from Greece and to the banks. Was there any damage to Greece because of that? No, because it was not new debt; it was only a refinancing of existing debt and that at much, much better conditions.

The damage of the 206 BEUR was to the tax payers of the countries financing the rescue loans. Had this money not been recycled to the banks via Greece, many of the banks would have had to be rescued directly: partial and/or full nationalizations. It is highly doubtful, however, that the entire 206 BEUR would have been required for such partial and/or full nationalizations. And what is much more important: the tax payers of the lending countries would have received something in exchange for their bail-out --- bank equity which upon privatization in the future might have returned quite a bit of their money to tax payers.