Greece - The Dramatic Return of the Current Account Deficit!

This blog was/is essentially a blog about Greece's post-2010 crisis. After the exit from the Troika-program in 2018 and since the assumption of power by the Mitsotakis government, the crisis has turned into a bit of a success story and Greece, today, is on its way towards investment grade. And without a crisis to observe, there was no further purpose for this blog. The surprisingly high current account deficit for May (up 47% over the previous year) prompted me to write again about this issue.

From the beginning in June 2011, the importance of the current account for an economy like Greece's was the major issue of this blog. The current account is quasi the operating cash flow of an economy: it measures money spent outside a country's borders against money received from outside its borders. If more money is spent abroad than earned abroad (deficit), the cash shortfall needs to be covered with funds from abroad (mostly foreign debt). If there is a current account deficit, a country is living beyond its means cross-borderwise. From an accounting standpoint, a current account deficit represents a transfer of domestic wealth abroad or, put differently, a reduction of domestic net worth.

2014 was the best year for Greece's current account (or the worst, depending on one's point of view): the contraction of domestic spending power had contained the growth of imports, exports were beginning to rise and revenues from tourism were strong. The current account deficit was 1,2 BEUR, the lowest in memory (then about 1% of GDP).

The figures below compare 2014 with the linearly extrapolated figures for 2022; i. e. 5 months extrapolated on a linear basis into 12 months). Since the tourist season is not reflected in the extrapolation, the actual 2022 figures may turn out quite a bit better. Still, the overall picture is a valid case for observation.

(in billions of EUR) 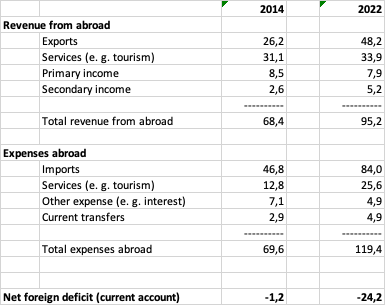 The number which jumps to mind is the 24,2 BEUR deficit! The worst deficit Greece ever had was about 35 BEUR in 2008 (then about 15% of GDP) and that eventually lead to the country's illiquidity. From 2014-2019, the annual current account deficit increased moderately. Since 2020, it is exploding and in 2022, it is likely to be about 13%! Given the huge amounts of foreign funding which will flow into the Greek economy out of the EU Recovery Fund, the current account deficit is likely to increase even further.

Inflow of foreign funds is great fun for the domestic economic agents: those funds represent revenues on the part of the recipients which leads to growth and wealth. The higher the inflow, the greater the fun (remember the 2000's?). The only problem is that pain can result once the inflow stops.

It all depends on how the money is spent. If the money is invested in projects of sustained economic value, the inflow will lead to sustained prosperity. If it is spent on short-term consumption, we will see a repeat of 2010 at some point in the future.

The challenge for the Greek economy is to increase domestic value creation so that exports can be increased and, perhaps, some imports substituted. To achieve that would be something that could truly be called a "structural reform". Greece seems far away from that.

Even though the current account deficit is approaching a dangerous level, there is no risk of a near-term financial crisis. Greece has a relatively small amount of interest expense and principal of debt doesn't really start maturing until the early 2030's. And, as mentioned above, money will flow in from the EU Recovery Fund. So there really won't be any major financial constraints during the 2020's. When there are no financial constraints while money flows rapidly, all sorts of memories of Greece's past come to mind.