Manipulating Adults In The Room

The official trailer of Kostas Gavras' new movie "Adults in the Room" is out (the movie itself will be released on September 28). The movie is based on the book with the same title by Yanis Varoufakis.

There is one statement by Varoufakis in the trailer which displays the gigantic manipulation of Greek public opinion which was his trademark throughout:

"The rescue plan was to save the German and French banks. Their colossal debt was transferred upon the Greek people."

The question has been raised in the comments in which countries those banks which had purchased Greek bonds were located. The graph below provides some clarification: 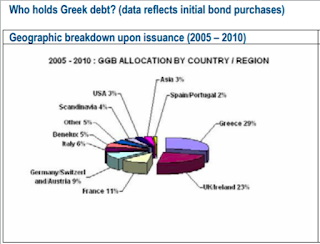 Below is a review of the above-referenced movie: