Manufacturing Expected On The Rise!

This is one of the most important graphs about trends in the Greek economy: the index reflecting the expectations of purchasing managers in Greece's manufacturing sector ("Manufacturing PMI"): 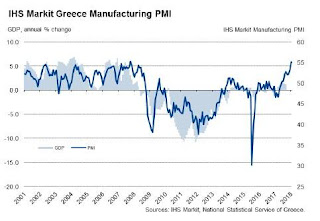 The light blue field in the background represents GDP. In 2010, when Greece's GDP first collapsed, the PMI exaggerated that collapse. The same phenomenon occurred during the drama times of 2015-16 but then the PMI's exaggeration was much greater than before.

The point, however, is this: for quite some time now, the PMI is rising. Rising significantly above GDP growth. There is no other way than to interpret this as a very positive sign for the near future of the Greek economy!
Eingestellt von kleingut um 12:45 PM