The Challenge Of Understanding Greek Statistics

Only recently had I commented on the most favorable preliminary state budget figures for 2016. I had reported that the "state" recorded a primary surplus of 4,4 BEUR in 2016, compared with 2,2 BEUR in the year before and a target for the year of 2,0 BEUR. By all standards, a rather sensational result.

Yes, but with a question! Below is the table for the "general government" in P+L format: 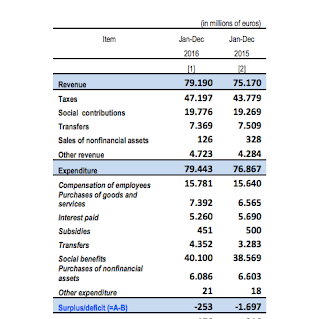 The message is short: revenues (mostly taxes) went up quite a bit and expenses went up a bit less so that there was a significant overall improvement over the previous year. In 2015, the primary surplus was 3.993 BEUR (after adding 5.690 BEUR interest expense back into the overall deficit of minus 1.697 BEUR).

My overall prediction that the "general government" would turn out even better than the "state" proved correct. I doubt that the major discrepancies described above represent incorrect figures because, after all, all figures come from the same source (Ministry of Finance). My guess is that the discrepancies are a matter of categorization and presentation, which often happens, but it would be useful to be explained what they are.
Eingestellt von kleingut um 10:40 AM