Greek Shipowners - More Take Than Give? 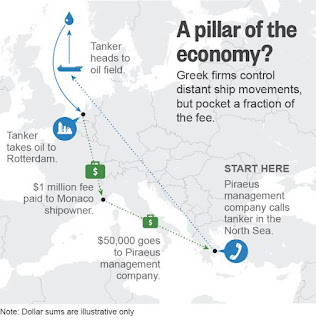 Reuter reports on The Greek Shipping Myth. The Greek shipowners are not going to like it.

The organizational structure which the shipowners are using is not unique. On the contrary, probably every larger company with international/multinational operations is using similar structures; at least to an extent. And --- there is nothing illegal about it.

For example: an Austrian supplier of, say, pulp plants owns valuable patents. He will, in all likelihood, house those patents in some offshore company in a tax haven; very often Cyprus. And whenever the Austrian company sells a plant, a royalty is paid to the Cyprus company for using its patents. This is totally transparent to the Austrian tax authorities but those royalties reduce the taxable income in Austria dramatically.

The only effective measure for a government to still get some revenue out of such structures is to negotiate the royalties which leave the local tax jurisdiction or, vice versa, the percentage of total revenues which return to the local tax jurisdiction as management fees. In Reuters' example, Greece gets about 5% of total revenues as management fees. If that were increased to 10%, the absolute amounts would double.

To catch corporate taxes in a world of tax havens is a most difficult taks. To catch private taxes is much easier because the tax subjects are in the country and they don't want to emigrate. Thus, it would seem to me that, instead of chasing corporate taxes of Greek shipping companies, the Greek tax authorities should make a much greater attempt at chasing private taxes and to design tax laws accordingly.
Eingestellt von kleingut um 10:12 AM